"The dragon wishes to devour 'the child brought forth'"

Today has been an interesting day watching social media, as dueling opinions met both inside the chambers of the Supreme Court and outside on its steps to discuss whether people of faith in America should be forced by the government to compensate for morally objectionable services through the health care provided to their employees.

First, on social media, the ACLU and others declared their stripes by way of allusion to the 'Occupy' movement - because the politics of class war and race war and #waronwomen are all out of the same rule book:

RT if you stand w the 99% of women who have used #birthcontrol at some point in their lives. #NotMyBossBusiness pic.twitter.com/tu67LMdFD9
— ACLU National (@ACLU) March 24, 2014


The folks at Alliance Defending Freedom - the firm representing the Hahn family's Conestoga Woods Specialties, one of the two companies in court today against the mandate - came back with this clever riposte:


The sloganeering of the day was an interesting facet, with the trending tag #NotMyBossBusiness carrying most of the pro-abortion and pro-contraception messaging... which kind of annoyed me on a couple points: because, well, #NotMyBossBusiness is #NotGrammaticalCorrect; and... 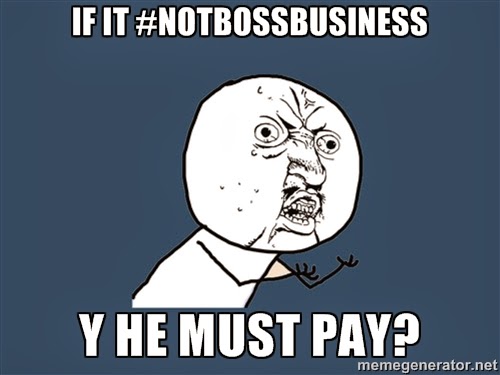 Despite bad weather outside of the Supreme Court, both sides were out in force. Perhaps the Instagrammish filter over this image from the Center for Reproductive Rights (don't get me started) was meant to lure people out because, wow look it's like sunny:


The prerequisite crass signs were on display, too (and happily spread around the internet by Planned Parenthood):

It may be cold out but this crowd is bringing it! #NotMyBossBusiness! pic.twitter.com/b4NSYCWJYC
— Planned Parenthood (@Latinos4PP) March 25, 2014


And the hand-in-glove relationship between the gay rights community and the pro-abortion lobby - a phenomenon which demands greater discussion and reflection - was also evident:


And there was this gal, very proud of her sign evidently. ["Psst: You forgot to add, between 'crafts' and 'cabinets,' a checked box for 'employing your ass at a decent wage in the first place when neither you nor they have been forced into that arrangement.'"]

But there were, as I said, plenty of folks were out from both sides.

I created and posted this image on Facebook earlier today because what it says seems to me strikes to the heart of the issue: This is an issue that impacts us all! We're all the Defendants now. 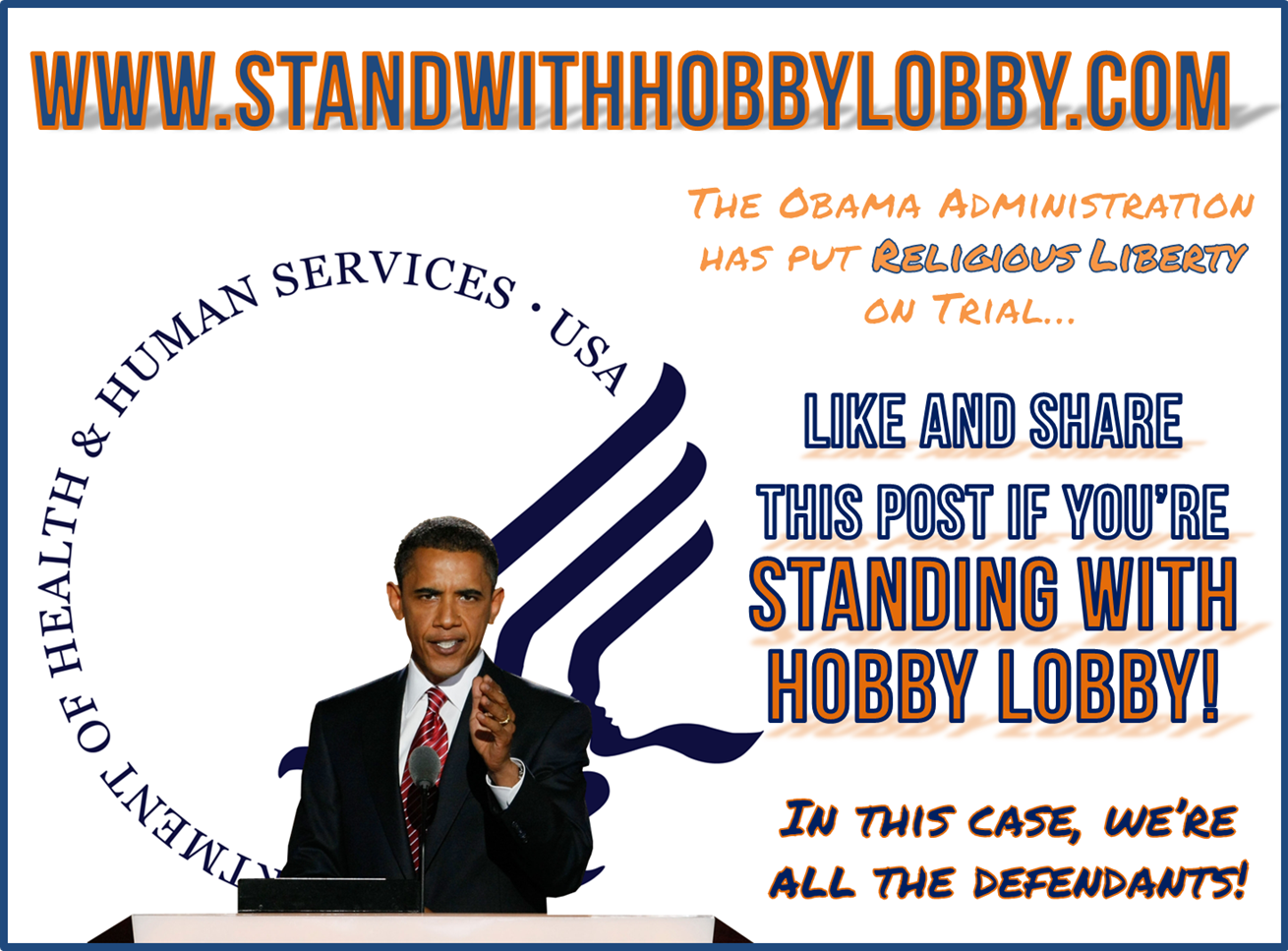 And I wasn't the only one reasoning thus... (and kudos to the #ReligiousFreedomForAll organizers or whoever made these signs which very nicely counter the "not my boss's business" meme):


But above all, it was good to me to see - on this Feast of the Annunciation - that prayer was a part of the demonstrations, because prayer is very much needed in this fight.

Prayer is needed because, as Blessed John Paul II reminded us in his encyclical Evangelium Vitae - first published exactly 18 years ago today - the fight is not just between flesh and blood, but involve higher (and lower) realities:


Mary thus helps the Church to realize that life is always at the centre of a great struggle between good and evil, between light and darkness. The dragon wishes to devour "the child brought forth" (cf. Rev 12:4), a figure of Christ, whom Mary brought forth "in the fullness of time" (Gal 4:4) and whom the Church must unceasingly offer to people in every age. But in a way that child is also a figure of every person, every child, especially every helpless baby whose life is threatened, because - as the Council reminds us - "by his Incarnation the Son of God has united himself in some fashion with every person". It is precisely in the "flesh" of every person that Christ continues to reveal himself and to enter into fellowship with us, so that rejection of human life, in whatever form that rejection takes, is really a rejection of Christ. This is the fascinating but also demanding truth which Christ reveals to us and which his Church continues untiringly to proclaim: "Whoever receives one such child in my name receives me" (Mt 18:5); "Truly, I say to you, as you did it to one of the least of these my brethren, you did it to me" (Mt 25:40).

While what was ostensibly being discussed - at least in the courtroom - today was a question of constitutional rights and authority, the real matter cuts much deeper:  Quid est homo? What is man? What is he for? What does our nature, our sexuality, the special union of man and woman that creates new life really mean for us? And what does it mean when we misuse that nature?

These are questions which we all need to ponder more deeply - some of us very direly.

We are the 99% of Catholic women who have used #birthcontrol. #NotMyBossBusiness pic.twitter.com/dLI2Gk7Y1E
— Catholics for Choice (@Catholic4Choice) March 25, 2014


It is sad to see the Gospel of Life rejected by so many, especially by those invited to fullest communion with Christ's Mystical Body through membership in His Holy Church. Christ Himself is that Gospel, is that Word of Life - something we are reminded of so profoundly as we reflect on the very beginning of it all, the Angel's visit to Mary. But the forces of the Evil One are seeking to destroy that Truth, to silence or distort the Word of Life. With God's grace, it is for us, His disciples, His messengers, to snatch that precious word from the clutches of the dragon.

So may we all strive to do better in proclaiming that Gospel, and doing the Works of Mercy - such as instructing the ignorant, counseling the doubtful, and admonishing the sinner. But let us, most of all, lift up to prayer those who have wandered astray or who are lost, that they may be converted to the Truth and so come into eternal life. 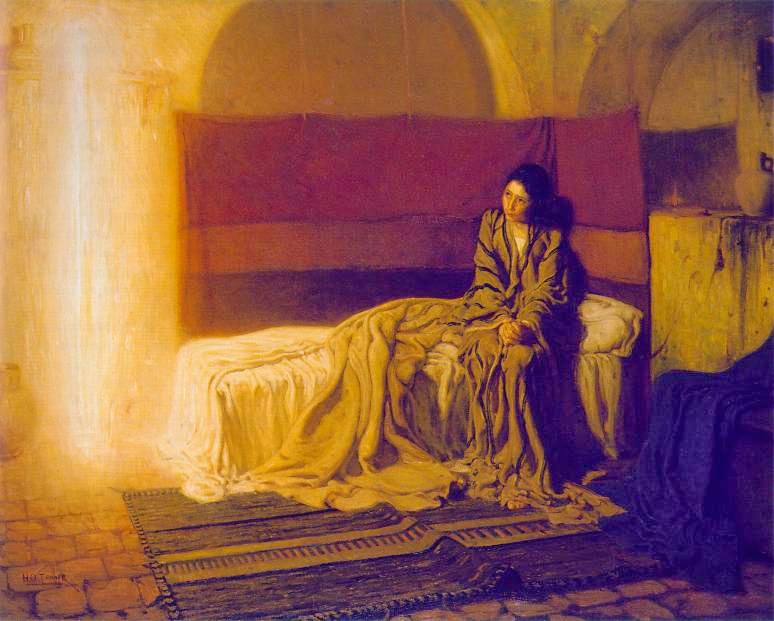 O Mary, bright dawn of the new world, Mother of the living, to you do we entrust the cause of life. Look down, O Mother, upon the vast numbers of babies not allowed to be born, of the poor whose lives are made difficult, of men and women who are victims of brutal violence, of the elderly and the sick killed by indifference or out of misguided mercy.

Grant that all who believe in your Son may proclaim the Gospel of life with honesty and love to the people of our time.

Obtain for them the grace to accept that Gospel as a gift ever new, the joy of celebrating it with gratitude throughout their lives, and the courage to bear witness to it resolutely, in order to build, together with all people of good will, the civilization of truth and love, to the praise and glory of God, the Creator and lover of life. -- Bl. J.P. II

Mary, Mother of Jesus Christ, Who is Life itself: Pray for us.
Posted by Joe Grabowski at 4:52:00 PM