Why, You DO Hate Babies!

[EMPHATIC CONTENT WARNING: Some of the content in this post might be disturbing to more sensitive readers, so proceed with caution. It's nothing that will get you fired or anything, but it could leave you heavy-at-heart.]
"Why do you hate babies?"

... or puppies, or kittens, or rainbow, or flowers, or any and all things good?

So goes a meme or trope or whatever you want to call it that frequently is bandied about among my friends in internet conversation. It's mean, of course, to parody those whose failure to engage in rational discourse leads them inevitably to ad hominem type attacks or to convenient non sequiturs. 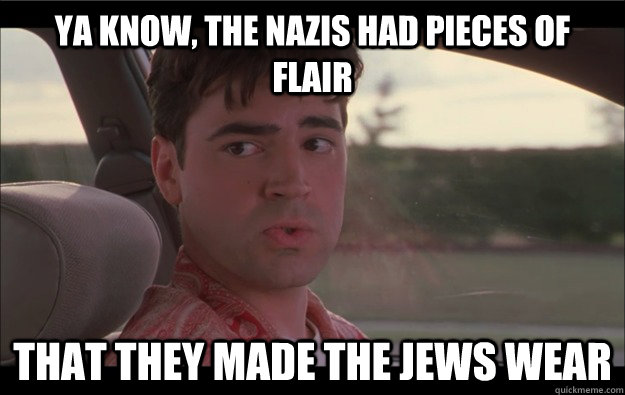 Thus, for example, if in a public forum (such as on my Facebook timeline), I were to criticize the actions of a certain type of pro-life activist whose tactics were offensive for some reason, there is a certain other type of pro-life who probably before long would come speeding in with a line of accusations. None of these accusations would be based in any reasoning or facts; none would follow in any logical way from my criticisms. But the probability is so high as to appear a necessity that sooner or later in any thread of the sort, the following sorts of comments will be made:


I DARE criticize SO-AND-SO?!? [NB: ALL CAPS are a useful tool for this type of commenter.] What have I done for the pro-life movement, that I should talk? How @#$%ing DARE I be so UNCHARITABLE? Why, I am aiding and abetting the entire abortion industry myself! I might as well be performing abortions with my own hands! I just DON'T CARE, I guess, about the poor innocent BABIES!... and so on, ad nauseam.


And having seen this pattern enough to be able to predict its instant likelihood at the onset, my friends and I will tend to preempt such idiocy by jumping in first on one another's potentially provocative threads with the question: "Why do you hate babies?"

So fun has it been that it's morphed into sundry other forms. One of us dares diverge from lock-step with the Republican Party as the only way forward for preserving anything that is good? "Why do you hate good?"

A version can of course also be used to lampoon the same unreasonableness in those who are opposite on the principles (in addition to those who are bunkered off our right flank): thus, should anyone of us post something that dares question the wisdom of the State radically altering the definitional basis of marriage and family, he could be asked, "Why do you hate love?"

It's fun, and a way to laugh away all the ignorance out there. But some crazy can't be so easily shaken off...
Behold... Bratfree! 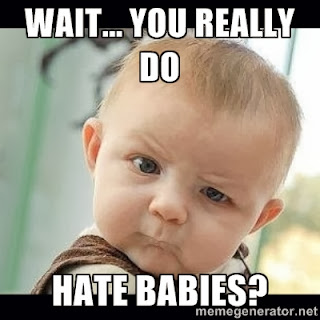 This is a forum that allows "for the child-free to post rants and discuss world events as they relate to being child-free." You won't find that description on the website linked above, however: it's from a Google search result for an apparently now-defunct version of the forum. It would seem that these vile losers have already been kicked off various other hosting platforms and had former versions of the forum shut down.

Still, they're back, and from the sheer numbers and rate-of-posting (and replies - e.g., average posts garnering hundreds of views, scored of replies, running onto several webpages of text - results I'd be thrilled with!) it isn't your average nutter's club. Oh, how I wish I could say it were - a point I'll elaborate upon further down.

But what sorts of things "relate to being child-free" such that they inspire such frequent "rants" and (ahem, I use the term lightly) "discussion," you ask?

Well, how about that pesky trend of Babystalking! [I can't make this shit up, honestly.]

A thread started by username "SlumSlut" (I can't wait to see my Google analytics), complained that... bah, what they hell, here, see for yourself! 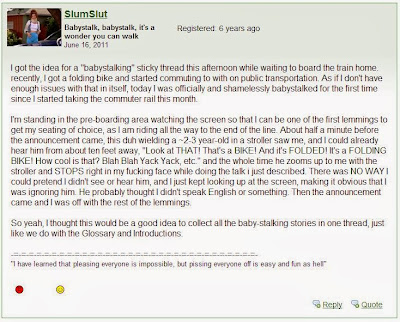 A BABY WAS BABBLING AT ME!!! THE HORROR, THE HORROR!!!
But "SlumSlut" is not without her sympathizers. Nooooo... there's thirty freakin' pages worth of 'em.

Like this charming person who wishes mothers would "Keep a short leash on [their] feral brat[s]" and keep them from "want[ing] to say hello to [her]."

Yep. These people really are that gross.
"But what has brought this on?" [Okay, let's be blunt, you're asking "Where the hell does he find this crap?"]

Well, as you may know (hold on for what might seem a topical whiplash), next week is the March for Life in Washington, D.C., somberly commemorating that dark day in our nation's history when the Supreme Court's decision in Roe v. Wade was handed down and a bright dawn broke for the would-be Bratfree.

The March for Life initiative was begun by one of my personal heroes, a woman I admire above many other great Americans more vaunted or celebrated: Nellie Gray. As the link there will tell you, this outstanding figure passed from this life in August of 2012.

As I was researching for a post on the March for this blog, I decided maybe I'd focus on Gray herself. But high in the results of my searches were the reactions of the folks at Bratfree. And, yes, they're as despicable and as disgusting as you'd expect. [I REITERATE HERE MY DISTURBING CONTENT WARNING].

Here are just a few of the most offensive reactions among literally hundreds upon the death of a woman who, throughout her life, "prayed for conversion of people who didn’t have the same views[*]" and whose work was inspired by the legacy of the Civil Rights movement[**].

I'm not posting a link to this thread because it's honestly that hard to stomach in any greater helping than this.

And yes, that is a user with the moniker "SatansBitch" followed by one with an avatar picturing a baby (and, by implication, perhaps, since this is Bratfree(!), all babies?) as... Hitler.
But I'm not just going through this exercise to be a downer.

No, I do have something like a thesis here, and it's this: my friends' and my rhetorical joke depends upon the widespread if not universal significance of "baby-hatred" as an inherently irrational and morally objectionable thing. And yet, this fringe exists. And just as the irony and the juxtaposition, the reversal of ordinary sanity, are what give our joke its punch and value and meaning... so does the existence of this fringe, and its diabolical hatred for a woman simply on the basis of her opposition to abortion (and its willingness to liken babies to Hitler)... so does that fact throw into relief in a startling and powerful way just how deep is the bottom of the evil of abortion, how irrational and ugly it is at its dankest and most firmly dug-in roots.

No - I'm not straw-manning here. I know this is a fringe. I've called it one myself. The vast majority of abortion supporters are ignorant, or duped, or injured, or all of them, or suffering any number of other causes that mitigate the evil of the choice to support such a terrible crime.

No, this is a fringe. But its baby-hating ethic is not all that far removed from the impulse to remove sex from its natural consequences, or marriage from its fundamental purposes, or the natures of men and woman as male and female from their biological design and supernatural destinies. The culture of death consists of a sowing and reaping, and even if this particular ugly weeds pop up all aligned in a row, some of those same seeds blew wide during the planting, and hints of the same aroma can be caught wafting up from throughout all the neighboring rows.
My concern in writing this post is also to combat a popular lie told by the abortion lobby: the lie that all the extremists are on the anti-abortion side.

There are such extremists, to be sure. And I have no truck with those who would turn to violence to attack those people whom I have noted above are as likely as not merely ignorant or confused or wounded themselves already.

But in all the years I've gone to the March for Life, I have seen very little of that. Certainly I've seen no violence in my trips there. But I mean even just the belligerent signs or the obnoxious guys with megaphones are pretty few and far-between.

Much more prominent, noticeable, and aggressive are the counter-protesters I've seen there. The same is true of all my times praying on sidewalks near clinics. In all those times, on every occasion there were untoward and hateful words or actions on the part of either clinic workers or volunteers toward us who were praying there. Only once, on the other hand, can I recall anyone on our side being out of line: it was a guy with a sandwich board that was offensive and stupid. I was in the seminary at the time, and wearing clerical garb. And so I was bold enough to walk up to him and tell him his message wasn't welcome there, and that he should leave. He did.
And so, finally, here is my point with this whole post: Bratfree exists: a whole forum dedicated to people who hate babies. And, since I can't help but think it is relevant to the pro-life cause and to pro-life work, I'm going to be sitting with that over the days leading up to this year's March for Life, and pondering a question I've uttered as a joke so many times before, now searching for a real answer: Why do they hate babies?
Posted by Joe Grabowski at 6:59:00 PM