On Trolling Planned Parenthood (and You Can Too!)

[This post is occasioned by a conversation in which I was asked to defend one of my strategies for engaging in pro-life work: to wit, trolling Planned Parenthood. There was, to this, an implicit moral angle and I do respond to that here, although somewhat tangentially. But I want to foreground one point which is only ancillary and not directly related to the outline of my tactics given below. It, nonetheless, expresses what truly is one of my motivations in all of this, and part of what you might call a "test case" approach. You see, my strategy in dealing with Planned Parenthood focuses on promoting the truth by revealing their lies. And that is a strategy I'd recommend to be more widely adopted.]

When I'm bored or suffering writer's block, I troll Planned Parenthood on Twitter. They are pretty dependable for putting their foot in their mouth for those who can read between the lines.

Thus, for example, way back in May, they posted this sanctimonious and diabolical B.S., for which I gave them a hard time: 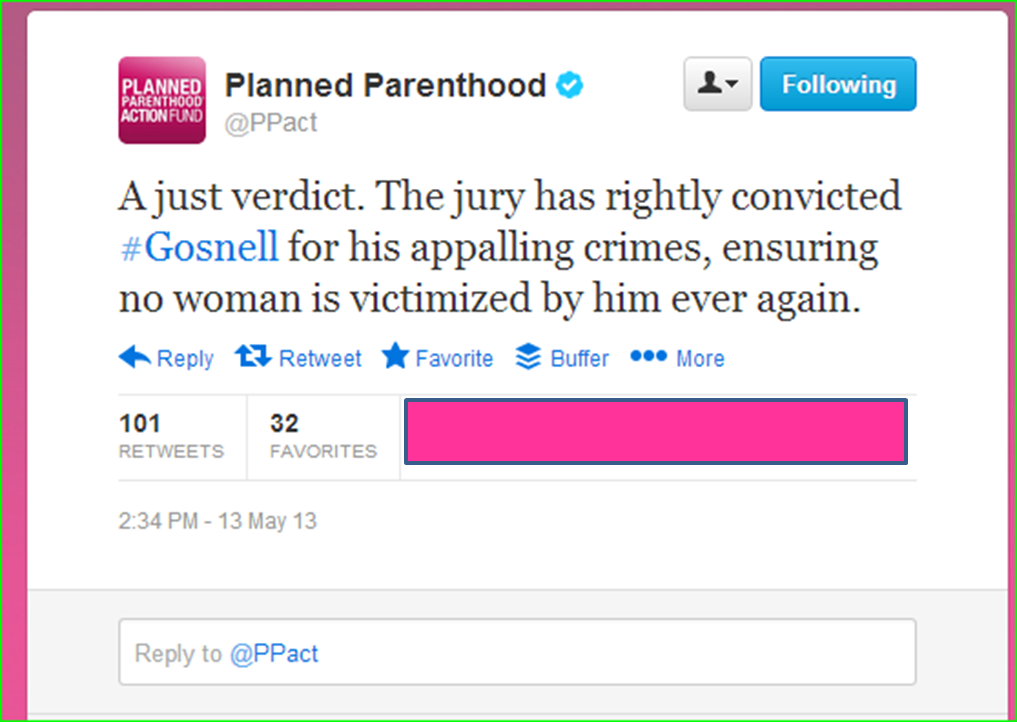 Don't get me wrong, I was as happy as anyone that Philadelphia "House of Horrors" abortionist Kermit Gosnell - who operated mere blocks from my home, and whose "clinic" I would travel past on a regular basis (with a shudder) - was found guilty for his crimes...

But it seemed to me at least a bit disproportionate (if not positively disingenuous) to report on the verdict focusing on the lesser charge of involuntary manslaughter (for the death of one of his female patients) while being silent on the three first-degree murder charges for killing babies born alive in botched (illegal) late-term abortions. 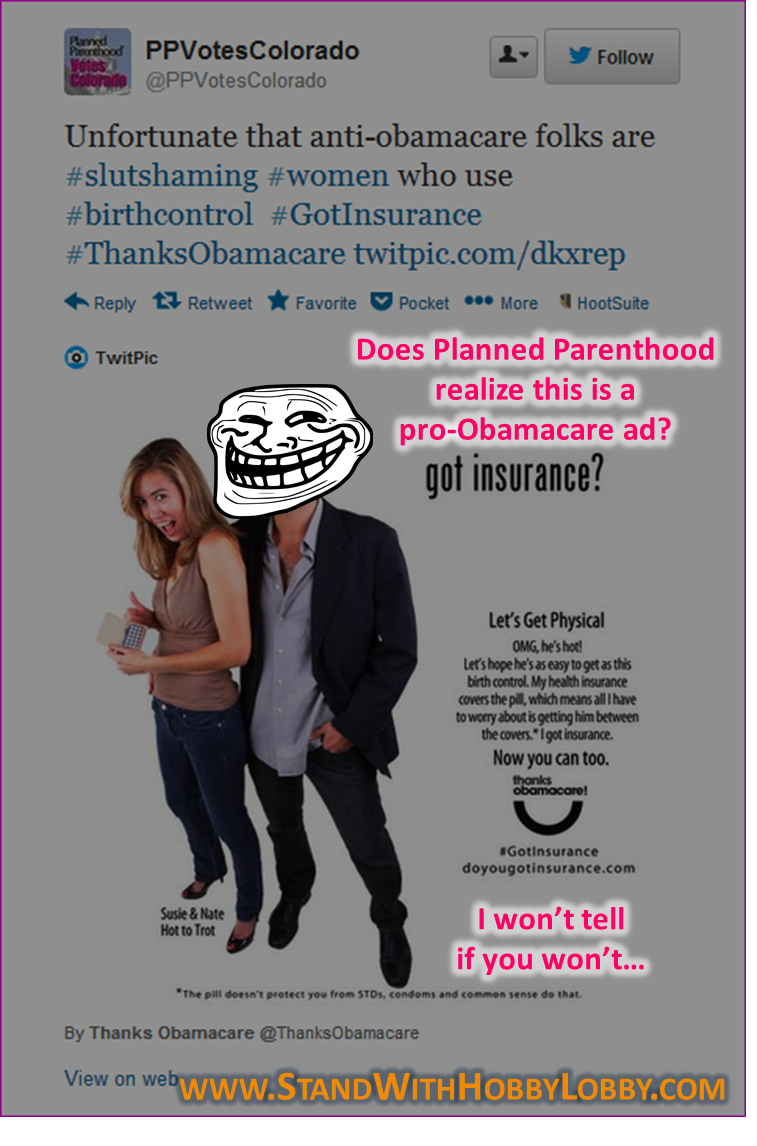 The first real reward of my intent came when a Colorado branch of Planned Parenthood offered pro-lifers and conservatives generally a veritable Easter egg by responding to one of the now-infamous Obamacare ads being produced in that state. With other ads glorifying raucous and irresponsible college living and keg stands and the like, it is telling that this one stood out particularly in its stupidity.

So stupid was it, in fact, that Planned Parenthood of Colorado assumed that it was a parody made up by enemies of Obamacare and not one of their fellow government-funded Obamacare shills.

I crafted a Facebook meme for my Standing With Hobby Lobby page to call attention to the embarrassing blunder. Again, as with the tweet back in May regarding Gosnell, there was the same sanctimonious tone, here aimed at "anti-obamacare folks" who Planned Parenthood assumed to be "slut shaming" with the ad.

But the moral high ground couldn't long be maintained when they realized that it wasn't anti-Obamacare folks at all but pro-Obamacare folks who crafted the message. And their intent wasn't to "slut-shame" at all but to appeal to young people. The ad, though, remarkably manifests the implicit disregard for the intelligence and integrity of young people that characterized the entire pro-Obamacare campaign in Colorado. And when @PPVotesColorado realized its error and decided to "clarify" their message, not the least remarkable thing in their follow-up was that they demonstrated more of the same condescending and patronizing presumption toward their audience. 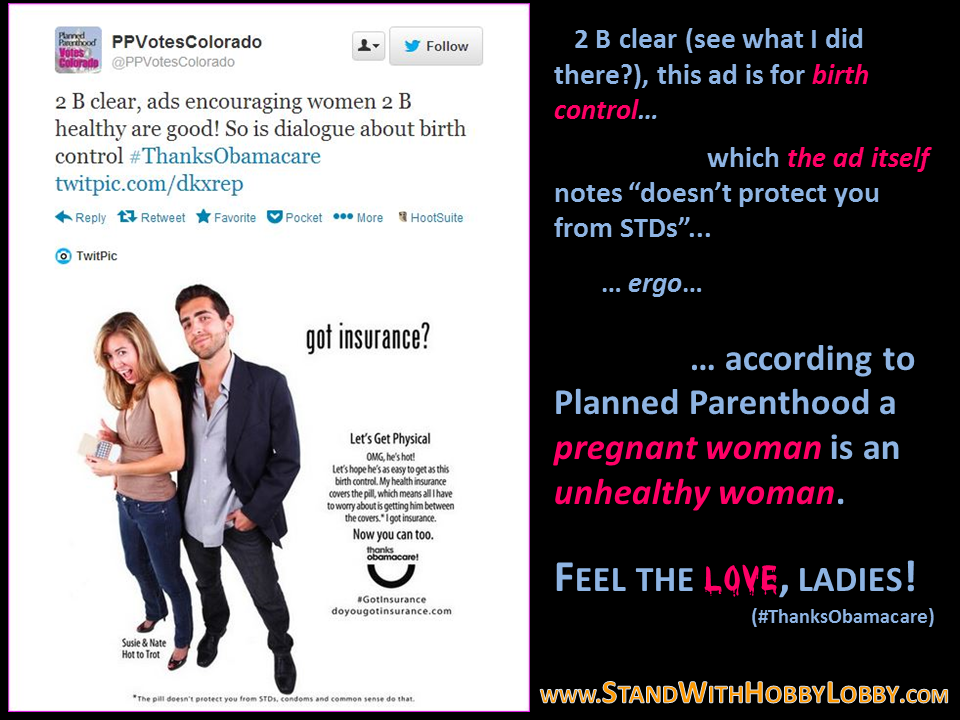 By this point, a definite trend was becoming obvious to me.

One of the most compelling ways to argue against the culture of death, I found, seemed to be simply listening to the messages that culture offers in its own propagation and self-defense.

I had known long before this that the pro-life world-view was inherently the more rational and the more reasonable, and wondered often how others could manage to see things otherwise. But it was becoming painfully and regrettably clear (and I do mean what I say by both those modifiers) that those hoodwinked into trusting Planned Parenthood and their like weren't so much seeing things differently as they were not seeing things at all. How else to explain how such easily-dismantled logical houses of cards managed to be maintained and to stand so long? Like many card houses, the secret to success was the cheat, the lie, the glue of willful ignorance that held the whole edifice together.

So I committed myself further to paying greater attention, to hearing and seeing and taking my opponents in the culture war at their own word, in order to show how their own words turned back against them time after time after time.
Now, I want to take a brief detour here to explain something which is often misunderstood, about me and about Catholicism generally: we must bear in mind always that admonishing the sinner is one of the Spiritual Works of Mercy. And the attitude of mercy and the spirit of Christian charity must always be at the heart of this work.

In this respect, for those unfamiliar with her work, I really must commend someone I believe to be one of the most powerful, compelling, and merciful voices in the entire pro-life movement: former Planned Parenthood employee Abby Johnson.

When I attack Planned Parenthood with some guerrilla social media hits, I am attacking its well-crafted and misleading public relations machine, its euphemistic rhetoric, its systematization of grave evil and strategy of calling good evil and evil good. I am not attacking the persons involved - indeed, I am trying to offer them fraternal correction so that they may turn to the truth and be saved.

I try - and we all must do - to be mindful that there are human agents working within that structure - lest we fall into fundamental error and end up degrading their fundamental worth and dignity, which is a very non-pro-life thing to do. 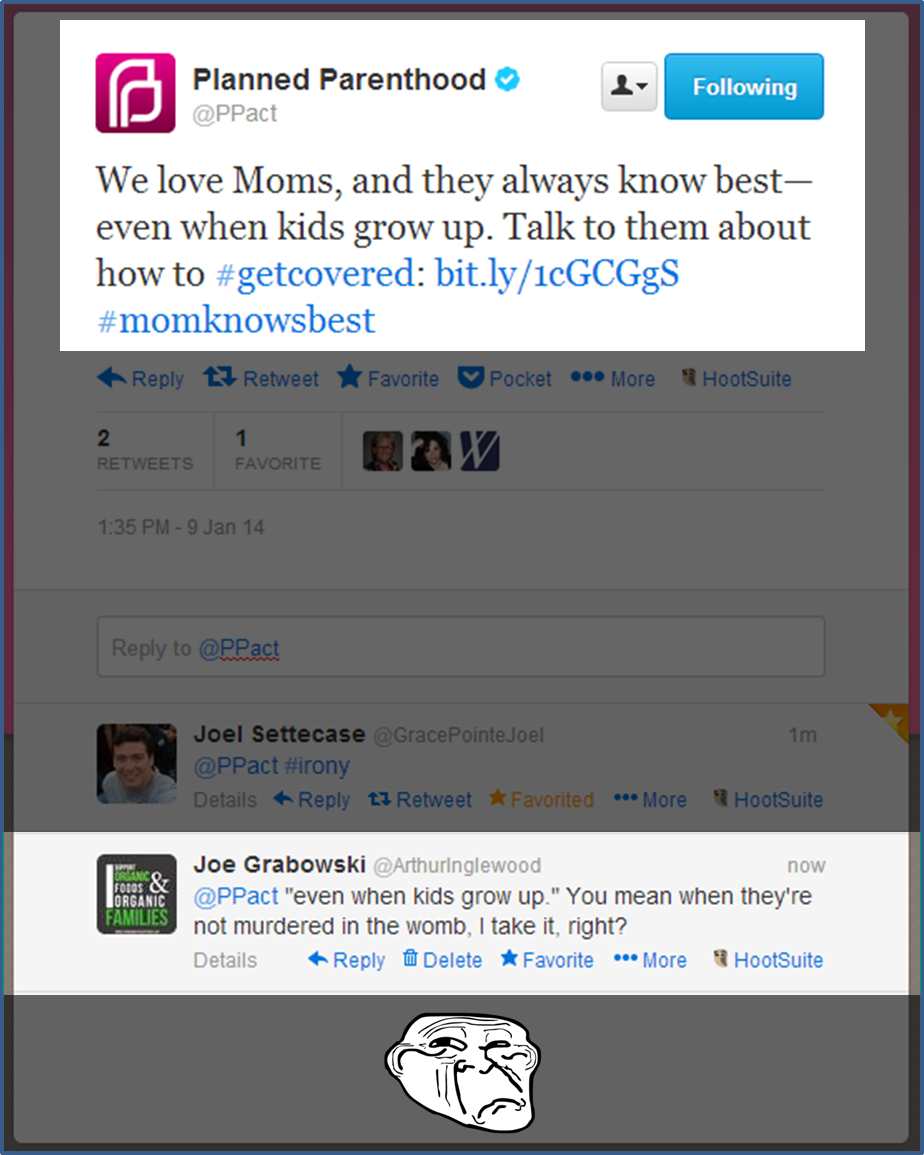 This detour has been important, because most recently, one of Planned Parenthood's tweets not only offended for its logical gaps, but cut close to the sensitivities of the issue we're engaging here. Indeed, seeing it the first time, something settled like a stone in my stomach. I almost wondered whether I should, or even could, respond. Certainly, no tongue-in-cheek had its place here, nor any of the attitude of mischief-making that frequently accompanies "trolling."

I was pleased to find that there's actually a somewhat somber-looking "troll" face available out there (isn't the internet wonderful?) which I felt reflected the spirit in the response I wanted to fire across the bow this time. For Planned Parenthood to Tweet about how the vocation of motherhood is life-long and extends even into the adulthood of the child, when they deny that motherhood is vocational at any point prior to the birth of the child, both angered me and saddened me. Here was more of that blindness, that inability to see the logical holes. And the same week (this was just this past Thursday) still more of the same was on display.

Planned Parenthood, along with other activists groups, is fighting a proposal to limit federal grant-funding for abortion services. As an article on the proposal explains [emphasis added]:

[The] “No Taxpayer Funding for Abortion Act,” ... would prohibit states from using federal grants to pay for abortion services sought by low-income pregnant women.

But there are other aspects in the full picture here that Planned Parenthood elides. For instance, the statistical links between race and poverty. (And, to be clear, I think it is more than merely a statistical link but an operative process: actual racism in America combined with the lasting effects of past systematic racism are material causes contributory to and determinative of poverty.] The upshot of which is that the abortion industry especially targets black women in America.

Also, while "African American women have 30% of all abortions... Black females make up less than 14% of the female population of the United States." [SOURCE]

These are the hard truths Planned Parenthood will never tell. These are the facts the organization covers with its lies. (And, as a side-bar, still another lie was in the news this week: on the very same day that abortion advocates were decrying the limitation of federal funds for abortion services other liberal media news outlets were calling the idea of federal monies paying for abortion services "a lie." The liar's paradox, maybe?)
Back, then, to the main point: the systematic lies and misinformation perpetuated by the agents of the Culture of Death are a house of cards.

Scrutinized closely - if all you do is watch and listen - the glue, the cheat, the lie holding it all together is easy to spot, and the illusion fails to impress.

But as long as so many in our society and unwilling or even unable to watch and listen closely, the process of revealing this trick needs a little help and cannot be left to happen on its own. Trolling Planned Parenthood gives us the opportunity to apply a little bit of heat to those joints in the house of cards and melt the glue holding it all together.
Posted by Joe Grabowski at 2:10:00 PM