Right and Wrong Thinking People Getting Things Wrong and Right (or Wrong?)

Two completely unrelated articles came across my news feed today, and somewhere in my brain alighted a tenuous connection between the two, but when I tried to grasp hold of it the bird had flown like the tricky minx in "Norwegian Wood." Good thoughts, like women, can be elusive that way. (And women can be a cause of reasoning going all crosswise, too - yet another connection worth exploring if only one could find the ends of the strand. But I digress.) 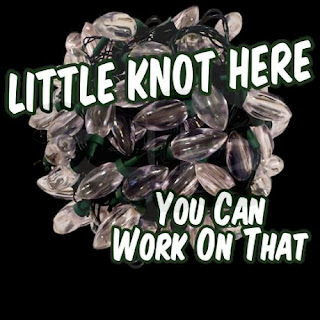 Despite my inadequate grasp of what I'm thinking, I'm going to try to express it anyway - and this, itself, will maybe end up seeming an irony in light of the subject I plan to explore, as we shall see.

The two unrelated articles seem to be sourced from opposite ends of so many spectra, but I really think they have more in common than first is apparent, both a falsis principiis proficscendi.

Now that isn't just a gratuitous dropping of a random Latin phrase, but a lead-in to a joke. [The phrase means "setting forth from false principles," by the by.]

The first article is given a Latin title, and was penned by HuffPost 'Gay Voices' Managing Editor John Becker: "Ego Te Absurdo: Francis is Advocate's 'Person of the Year'."

If Jar Jar Binks studied Latin... but again I digress.


Anywho, what I want to call attention to is the content of the article. Here are some snippets [emphasis in original]:


Let's pretend there's a person who works for a religious organization that fights LGBT rights across the globe. Said person has a history of making degrading comments about same-sex marriage. He's called it "a scheme to destroy God's plan," a "total rejection of the law of God," "a move from the Father of Lies" (i.e. Satan). He's even gone further, implying that the loving marriages of same-sex couples are evolutionarily inferior to opposite-sex marriages ("a real and dire anthropological throwback").

And just for good measure, let's pretend this man has also publicly claimed that gay adoption is a form of discrimination against children.

Now pretend with me that this person began to slightly moderate his anti-gay views, even throwing in a few nice-sounding words about not "judging" LGBT people -- while still not apologizing for his previous hateful remarks and taking care to point out that he continues to believe that the sexual expression of gay love is sinful and disordered.

Would you acknowledge and affirm what appears to be steps in the right direction? Absolutely. But would you breathlessly drape a pride flag around his shoulders and crown him a hero of the LGBT community? No way.

Yet that's just what The Advocate, America's best-known LGBT magazine, did when it named that man -- Pope Francis -- its 2013 "Person of the Year."

Now, HuffPost's 'Gay Voices' bloggers frequently manifest a real cultural myopia, a tendency toward angry projections, and a casual approach to fairness and honesty. And let's face it, even among mainstream media sources which across the board tend to be pretty daft regarding matters of religious, this particular outlet often lets its biases get even more in the way. 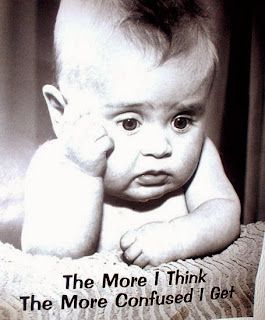 But when I first came across this article, it presented a conundrum to me. I half wanted to share it to Facebook and observe that finally here was a journalist getting Pope Francis "right." But of course, I wouldn't mean getting him "right" but manifesting something right in the very act of getting him wrong. [You can see why I said at the outset that my thinking on this struggled toward clarity.]

It's a messy tangle, but to try to bring it all home to, ya know, an actual point, I'll leave this tangled bunch alone and see if I can't find the other plug end of what I believe to be the same strand of lights.

That other end would be an essay by sometime radio-somebody and now fawned over conservative blogger Matt Walsh. The piece is entitled, "I can’t explain why we shouldn't murder disabled children."

Once again, right from the title, my skepticism was provoked: not, this time, due to shoddy Latin, but because W, precisely, TF?

I'm not going to bother fisking the article too much in-depth. On the surface, Walsh seems to be trying to make a point about how it is vital and useful to order argument according to at least some shared principles, which is a very obvious point, so widely accepted that it is bound up in the idiom "for the sake of argument," but sadly (and here's where Walsh does have something of a valid observation) too much neglected today when interlocutors stand opposite one another and shout past each other like bag ladies yelling at traffic. Witness: almost any panel on any news network, ever, which touches upon Catholicism. (Except MSNBC, when there is usually agreement by everyone involved due to the careful selection of effete heretical Jesuits and butch apostate nuns.)

But, the seed of a valid observation grows into an imaginary beanstalk of imagined insight and takes us up into the ethereal clouds. To wit, Walsh expounds:


If it isn’t wrong to kill children, then it can not be wrong to do anything else.

Let me say that again, because it’s a crucial point:

If it isn’t wrong to kill children, then it can not be wrong to do anything else.

Slavery? Genocide? How can they be condemned? Of what sort of moral standard have they fallen short? If the bar has sunken low enough so that infanticide can leap above it, then I doubt that any atrocity could find a way to limbo underneath.

Believe it or not, even politically incorrect comments about homosexuality have to be excused if we are to believe that baby killing is a moral act.

Which, reading, I find to manifest all of the sequential power of logic involved in this: 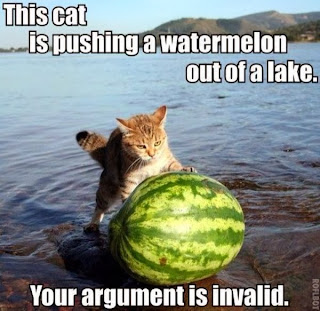 And then there's this paragraph:


So I sat down and intended to write about this case. I was going to explore all of the angles. I was going to point out, as a secondary issue, how these "wrongful birth lawsuits" (this one is hardly the first) will serve to make it even more expensive to have a baby at a hospital. Think of the liability issues involved if medical establishments can now be sued for not killing your baby. I was going to explain how this story is an inevitable side effect of the death cult philosophy which tells us that human life is worthless, and a parent’s right to convenience and comfort can trump a child’s right to the life God gave it. I was going to point out how the Nazis also murdered the disabled for the same reason we do: to rid society of those who might be considered a "burden." 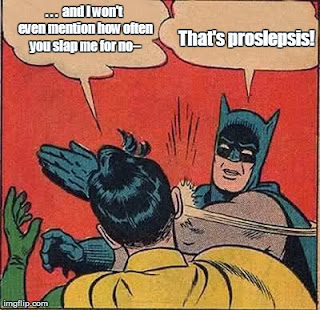 I won't even mention the clear evidence of Walsh's non-membership in the Society for a Moratorium on the Use of Allusions to Hitler in Argumentation. [See what I did there? Proslepsis. Learn it. Love it. Don't do it.]

Now, the point to all of this is that faulty (not to mention often uncharitable) reasoning plagues all sides of nearly all of the debates which trouble our culture.

I mentioned at the outset that there was a bit of irony in my sitting down to toss off some half-baked thoughts about this subject, because that's the trend that I thought in the outset of writing that I wanted to criticize. But now, through the exercise of actually having written, I realize that that isn't it at all.

It's about taking Matt Walsh's kernel of a criticism at the same time as maybe looking at The Advocate's selection with a deliberate intent to find what might be favorable and true and good. It's about working to find that little spot of common ground which Walsh admits is crucial to find in order to say anything at all, but only before he then proceeds anyway to write about how it simply doesn't exist.

I'm not so fatalistic yet. I think people can be reasoned with. I think that the True, the Good, and the Beautiful still have power to move minds and hearts.

It isn't easy all the time to play by these rules, of course. And certainly it doesn't mean we don't call a spade a spade sometimes, admitting that "we're nowhere" to even begin arguing an issue. Then again, we can infer this from common sense and common experience. We've all heard that voice of common sense, in a situation when we know that someone's anger or anxiety at that moment makes it an impossible time to try to reason with him or her: the common sense that tells us instead to put off that argument for another day, maybe taking upon ourselves in the meantime some opprobrium, guilt, or embarrassment. It isn't a squishy modernist nicey-nice question, but a confessional interrogation to ponder: What better serves this person right now, that I convince them they are wrong or that I remind them they are loved? 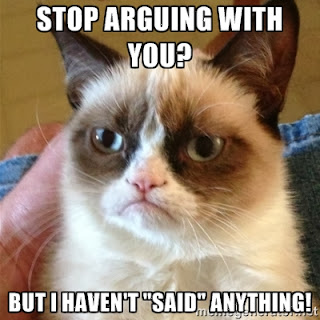 But, it might be objected: That's all well and good for pillow-talk, but what of the hugely important, hugely divisive, life-altering issues upon which Becker and Walsh have written? Gay marriage, abortion... we can't just defer those debates, can we?

It depends what we mean by "defer" and what we mean by "the debate," ultimately. In this context, I'm referring to the man-in-the-street encounters (or audiences which some of us have the capacity to reach), the barroom banter, or even the family dinner table, when issues - yes, even those issues - come up. I think it eminently wise, and eminently Christian, to put first things first in those cases: to see the other and to try to know and understand him or her. To try hard to find the common ground, however far from our issue or our point in may be: to meet upon that tangential plane would be better than meeting not at all.

This is how we begin from the right first principles: we begin with the other. And involved in this is an act of Faith and a recognition that the Truth is not ours, it is larger than us. (Woah - relativism! What gives, Grabowski?) No, you'd misunderstand me. I mean, if we have the Truth and believe the Truth, we need to  be humble in that awareness when we approach those that we know (because of our relation to the Truth) are wrong. In other words, I don't mean "we don't own the Truth" so as to suggest we can all be right about things. But that there might be some part of the Truth that that other shares, and our job then is to meet the other there and bring them further into a shared experience of something which does not come from us.

So, let us then be co-workers in the Truth (to quote our Pope Emeritus) and, when we argue and when we evangelize, let us start from the right first principles precisely by starting from them together.
Posted by Joe Grabowski at 12:44:00 PM