Why I Plan to #Stand4Life Today

Today, July 2nd, the Texas legislature will be reconvening in a special session to reconsider The Omnibus Pro-Life Bill that was derailed last week when, following an 11-hour filibuster by Texas Senator Wendy Davis, a pro-abortion mob disrupted proceedings and delayed the vote on the bill from getting counted before the deadline.

On social media today, pro-life activists are going to #Stand4Life and show support for the reconvening legislators as they do the work their constituents want done, in the hopes that our voices will be heard over the shouting from the galleries.

As with previous social media campaigns in this vein, the primary vehicle for this initiative is a Facebook event page, but more information on the initiative can be found on the website www.Stand4Life.net, including  graphics to share during the day-long "Tweet Fest," such as this one: 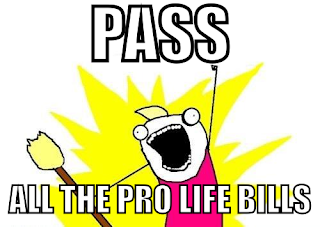 I will be participating in this social media blitz as I have done with similar initiatives in the past, but wanted to issue a full statement of my intent - and some pertinent caveats - here, where I have space to do so beyond the limitations of 140 characters.

The Texas bill is an important one for the pro-life movement, especially now as it has become a symbol of sorts following Senator Davis's audacious filibuster and the noisiness of the activists on the other side of the issue. It is worth noting that this bill is relatively modest; according to Stand4Life, it aims at four goals:
These are, as I say, relatively modest goals. Reading them, of course, especially in the wake of the horrors uncovered during the criminal trial of Philadelphia abortionist Kermit Gosnell, one can easily enough ascertain their rationale and logic. Along the same lines, when considered in light of Gosnell, one also easily understands the passion and the intent of pro-lifers engaging in today's online event. Less understandable is the behavior of protesters against the bill, such as this charming young lady:
But having mentioned the relative modesty of the bill, it is here that I must announce the caveats to my participation in today's event:

Speaking for myself, I have always been leery of the "incremental approach" to pro-life legislation. Friends of mine whose work in this field I admire ensure me that my fears are unfounded and thus I am cautious never to raise too vocal of an objection lest I obstruct the good work they are trying bravely and with the best intentions to do. Nevertheless, I would be dishonest if I didn't say it always makes me a bit uncomfortable.

Take this case, for example: the push for banning abortion on the basis of "pain capability" of the fetus belies the dignity and full humanity of the fetus younger than 20 weeks old. If the capacity to feel pain became a more widespread litmus test for the presence of life, it would endanger more categories of persons than just pre-natal ones, as well; but that is beside the point. The point is that in a way by limiting the ban, I worry that we may solidify the sense of abortion's seemliness in those cases that fall outside of the stipulations of this law, and only make fuller ban legislation more difficult down the road. (I should fully disclose here that this is how I feel as well with respect to the now rote and de riguer exception invoked "in the case of rape, incest, or danger to the life of the mother" -- my thought being that either we're serious in our belief that life begins at conception or we're not, and if we are then compromise of any sort should at least be something wrestled with in the particular case and not covered with some kind of platitude.) Therefore, while  I am told consistently, as I have said, that my fears in this vein are unfounded and bound to do little good and maybe a bit of harm if too often and too widely expressed; still, I could not participate in today's Tweetfest without clearing my conscience as to these matters.

And so, let it be known that, whatever may be the intentions of other people taking Twitter and Facebook by storm today, these are the reasons why I plan to Stand4Life:
So I hope you will bear with my on my social and web properties today as I #Stand4Life with other pro-lifers around the nation, and pray for the State of Texas and one day our whole nation to defend and protect all human life as sacred and inviolable.
Posted by Joe Grabowski at 8:15:00 AM