The Distributist's Bookshelf: G.K. Chesterton's What's Wrong With The World 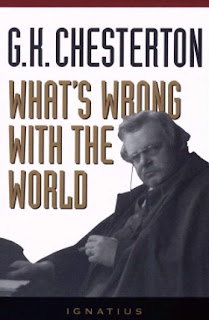 "I have called this book 'What Is Wrong with the World?' and the upshot of the title can be easily and clearly stated. What is wrong is that we do not ask what is right."

- from the first chapter, The Medical Mistake

In 1910, G.K. Chesterton presented to the world this "thundering gallop of theory" because, as he put it in the Dedication, "politicians are none the worse for a few inconvenient ideals." The ideals which he presented for the consideration of both politicians and the man-in-the-street are as provocative and challenging today as they were when the book was first published.

Apart from the figures of the man, woman, and child within society, three other characters figure into Chesterton's examination of modern society: Jones, the average man in the street, and his old mortal enemies, Hudge and Gudge, representing the liberal political aristocracy and the conservative respectively. Chesterton introduces the machinations of Hudge and Gudge in section one, demonstrating how their constant give-and-take about what to do with Jones only ends up disenfranchising and alienating Jones from the State which is as much his as it is theirs.

Hence, the homelessness of Jones. Hudge and Gudge, being practical men, set aside "idealism" in order to scrutinize the problem of Jones's poor situation and come up with a practical solution. Hudge builds tenement houses and bustles Jones into them in order to get him out of the ghetto, but his ideal charity ward degenerates into the slum of the modern welfare state. Gudge, reacting against Jones, repudiates the slums with vigor, but soon convinces himself - in support of his indignation - that Jones was better off where he was before and ought to have been left alone in his poor state. And Jones is left to choose between the poverty of abandonment and the poverty of degradation. "[T]he mistakes of these two famous and fascinating persons arose from one simple fact," Chesterton says: namely,

that neither Hudge nor Gudge had ever thought for an instant what sort of house a man might probably like for himself. In short, they did not begin with the ideal; and, therefore, were not practical politicians.

When, in his final section, Chesterton returns to Hudge's and Gudge's parsimonious practical politics, he proposes a theory which should give modern readers pause as they contemplate the binary political calculations to which we are reduced every election day:

And now, as this book is drawing to a close, I will whisper in the reader's ear a horrible suspicion that has sometimes haunted me: the suspicion that Hudge and Gudge are secretly in partnership. That the quarrel they keep up in public is very much of a put-up job, and that the way in which they perpetually play into each other's hands is not an everlasting coincidence. [...] I do not know whether the partnership of Hudge and Gudge is conscious or unconscious. I only know that between them they still keep the common man homeless.

The lack of idealism resulting in this age-old conflict also gives rise to the specific problems relating to men, women, and children. In the case of Man, the ideals of patriotism, comradeship, of self-rule and equality, give way to another poisonous philosophy, one which manifests itself in Imperialism and Social Engineering. Chesterton rails in one instance against the obsession with "hygienics" which was in vogue in his day, but we can easily see in this instance hints of our own current welfare projects: the tyrannical war against personal choice of lifestyle and health, the removal of table salt from restaurants, etc. Chesterton boils it down into what he calls "the huge modern heresy of altering the human soul to fit its conditions, instead of altering human conditions to fit the human soul."

In the case of Woman, the ideal of the domestic woman, Queen of her domain, gives way to a lesser ideal with the ironic pretense of trying to achieve something greater. The ideal of Woman becomes en-masculated and adopts ideals meant for men, which only serves to degrade the potential of women. A specific instance Chesterton uses here is the example of women's suffrage. One might take exception to his particular characterization, but one cannot deny the veracity behind his observation of the philosophy underlying the suffragist movement.

[T]here has happened a strange and startling thing. Openly and to all appearance, this ancestral conflict has silently and abruptly ended; one of the two sexes has suddenly surrendered to the other. By the beginning of the twentieth century, within the last few years, the woman has in public surrendered to the man. She has seriously and officially owned that the man has been right all along; that the public house (or Parliament) is really more important than the private house; that politics are not (as woman had always maintained) an excuse for pots of beer, but are a sacred solemnity to which new female worshipers may kneel; that the talkative patriots in the tavern are not only admirable but enviable; that talk is not a waste of time, and therefore (as a consequence, surely) that taverns are not a waste of money.

Thus, according to Chesterton, the modern Woman has abandoned her role of the Universalist, the Queen of a much larger domain within the domestic household, for an ancillary role in the much smaller domain of the larger State.

Finally, in the case of the Child, Chesterton observes that modern education has gone wrong by trading in the ideals of Tradition and Authority for trendy scientism and novelty. He says, "It ought to be the oldest things that are taught to the youngest people; the assured and experienced truths that are put first to the baby. But in a school to-day the baby has to submit to a system that is younger than himself." In education, says Chesterton, there's a certain "need for narrowness," a discernment. The modern educator dissembles the fact that he is indoctrinating youth by indoctrinating them with the firmest and most stifling dogma that was ever known: namely, the impossibility of dogmatic fact. And so the modern educator abandons "the true task of culture," which is "not a task of expansion, but very decidedly of selection — and rejection. The educationist must find a creed and teach it." This is an inescapable practical fact; the educator, whether he would or no, instills fundamental attitudes about the world into his student, which take the form of a practical creed in discerning facts about the universe. Chesterton simply suggests that the broadest of such attitudes - which also happen to be the oldest, classical postures - ought to be the ones used.

To the Distributist reader today, some of Chesterton's examples and the exact issues he chooses for debate may seem antiquated. But his project of discernment, and his fundamental distinction about the practicality of idealism is an ageless sentiment, and one which ought to be brought to every debate about politics today. Every Distributist should have this work on his shelf and return to it often, in order to absorb the spirit of that project into his own worldview, to begin viewing the world as Chesterton did - with clarity and insight, and with a solidaristic love for Jones.
Posted by Joe Grabowski at 7:46:00 AM