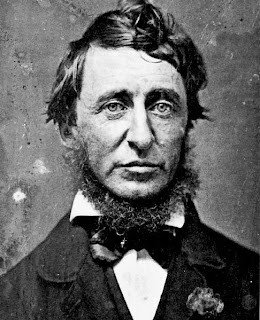 "I went to the woods because I wished to live deliberately, to front only the essential facts of life, and see if I could not learn what it had to teach, and not, when I came to die, discover that I had not lived.... I wanted to live deep and suck out all the marrow of life..."

- Thoreau, What I Lived For

In 1845, Henry David Thoreau took to the woods near Concord, Massachusetts with the goal "to live deliberately." He meticulously recorded the practical exigencies of his experiment and set them down in several hundreds of words which are amongst the finest prose ever composed in the English language. Whether or not Thoreau succeeded in his Quixotic experiment, he certainly did succeed in crafting one of the finest and most beautiful books ever written by an American.

It may seem a similarly Quixotic experiment to make Thoreau's treatise a hallmark of the ideal Distributist's Bookshelf. His philosophy of transcendentalism, for example, is rather at odds with the traditional metaphysical axiology of distributist thinkers like Belloc and Chesterton. His romantic notions of ideal pagandom and his fetish for Oriental wisdom would fain have met Belloc's approval, if quoted to him over a beer in a homely British Inn. But let's take a look at Walden and see why I think it deserves a place in every truly humane reader's library.

A good place to start is Thoreau's discussion of Economy. In the first chapter of his book, he outlines the "necessaries of life for man" which include "Food, Shelter, Clothing, and Fuel" (332). He distinguishes these from luxuries, which he says are not merely unnecessary, but often times positive distractions from more important things (334). He continues, in the same place,

When he has obtained those things which are necessary to life, there is another alternative than to obtain the superfluities; and that is, to adventure on life now, his vacation from humbler toil having commenced... (op. cit.).

Thoreau embraces the ideal of leisure. He observes that once man has taken care of the essentials of life, he should look at his freedom from want as an opportunity to contemplate higher things, rather than a chance for getting surplus wealth. Yet, this latter object is what he found occupying most of his contemporaries: "The mass of men lead lives of quiet desperation" (329). This desperation is largely due, Thoreau contends, to the industrial system, which begets a cyclic obsession with wealth, rather than true value:

The mass of men... are discontented, and idly complaining of the hardness of their lot or of the times, when they might improve them. There are some who complain most energetically and inconsolably of any, because they are, as they say, doing their duty. I also have in my mind that seemingly wealthy, but most terribly impoverished class of all, who have accumulated dross, but know not how to use it, or get rid of it, and thus have forged their own golden or silver fetters (335).

Now, this is an observation which the distributist critique of modern economy certainly shares. Thoreau's ideals may differ; he may have given his contemplative energies over to principles with which we do not sympathize. But he speaks to the fundamental drive in man to look beyond the merely material for more important things. His view of work and labor are, in the main, somewhat problematic. Sometimes, he seems only to view pejoratively the Divine mandate to "till the earth," which we know is a holy and meaningful occupation. Yet, even here, there is a point of contact with distributist principles. Thoreau is grappling with that special punishment which God selected for Adam after his fall in Eden: that he would henceforth only bring forth his food from the soil "by the sweat of his brow" (Gen. 3:19). The end of human labor is not in itself, but only meaningful within the context of a fully Christian anthropology, which takes into account the restorative power of grace. But Thoreau grasps that there is something deeper and beyond mere toiling.

Thoreau's complaints with the modern life do not stop there. He moved into relative isolation in order to commune with Nature. The hustle and bustle of modernity, for him, was disruptive to meaningful communion, as he explains in his chapter on solitude:

What sort of space is that which separates a man from his fellows and makes him solitary? I have found that no exertion of the legs can bring two minds much nearer to one another. What do we want most to dwell near to? Not to many men surely, the depot, the post-office, the bar-room, the meeting-house, the school-house, the grocery, Beacon Hill, or the Five Points, where men most congregate, but to the perennial source of our life, whence in all our experience we have found that to issue, as the willow stands near the water and sends out its roots in that direction. This will vary with different natures, but this is the place where a wise man will dig his cellar... (428).

Once more, that Thoreau found his own roots to be in a romantic deification of nature is surely not an agreeable end to the argument. But he starts out on the right path. He knows what Chesterton called "the homelessness of man." The agrarian ideal of many distributists, the movement "back to the land," is similar in its pursuit of this "perennial source of our life." Thoreau's cabin in the woods is the place where he goes in order to find himself: it is typical of that place which Chesterton describes in his essay, The Surrender of a Cockney: "Every man... has waiting for him somewhere a country house which he has never seen; but which was built for him in the very shape of his soul. It stands patiently waiting to be found... and when the man sees it he remembers it, though he has never seen it before."

Many other specific ideas and virtues of Walden might be referenced: its cunning ctiticisms of industrial squalor, its celebration of the value of home and homestead, its wry sarcasm about the many material possessions which man uses to prop himslef up (literally - in one place, Thoreau offers a wonderfully amusing satire on furniture: "Furniture! Thank God, I can sit and I can stand without the aid of a furniture warehouse") (see 374).

The greatest asset of Walden, however, is hard to put into words. It is its very ethos. The sheer beauty of Thoreau's prose is in some places literally enough to move one to tears of empathy. His descriptions of crickets chirping, or the sun rising, all the sundry wonders of creation which modern man takes so much for granted - these are the crown jewels of Walden. If not a single ethical principle articulated as such finds its way home when one reads the book, he shall still be somehow a better man for having poured through its pages - or rather, had them poured into him. For Thoreau's liquescent sentences speak directly to the romance in the heart of man which Chesterton knew to be the practical form of reverent awe and wonder. A distributist should return to the pages of Walden often, if only to re-sensitize himself to the miraculous renewal of creation that happens in each moment of every day: the budding of every flower, the falling of every snowflake.

Somehow, this ethos behind Walden is the ultimate communication of its words to the reader, and perhaps no digest is possible. Even Thoreau himself, a peerless master of our language, found it difficult to convey summarily this finding of his own practical experience. So, I shall end at a loss for words, and allow the author one final attempt of his own:

If the day and the night are such that you greet them with joy, and life emits a fragrance like flowers and sweet-scented herbs, is more elastic, more starry, more immortal—that is your success. All nature is your congratulation, and you have cause momentarily to bless yourself. The greatest gains and values are farthest from being appreciated. We easily come to doubt if they exist. We soon forget them. They are the highest reality. Perhaps the facts most astounding and most real are never communicated by man to man. The true harvest of my daily life is somewhat as intangible and indescribable as the tints of morning or evening. It is a little star-dust caught, a segment of the rainbow which I have clutched (495).