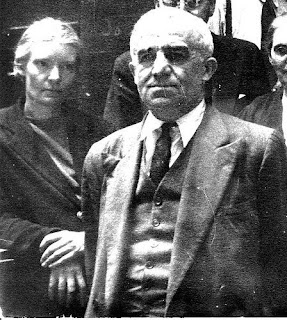 “Peter’s teaching was simple, so simple, as one can see from these phrased paragraphs... that many disregarded them.”

“[T]o create a new society within the shell of the old” – this was Peter Maurin’s aim. This was the goal he articulated for the Catholic Worker when, with Dorothy Day in 1933, he co-founded that movement and its publication.

Houses of Hospitality and Cooperative Farm Communes where the rule of life was the daily practice of the Corporal and Spiritual Works of Mercy: this was his vision. It was a vision that changed many people’s lives, Dorothy Day being one of them. And, with her help, it was a vision that seemed at times as though it really might change the world. And it may yet.

But neither Peter’s goal of reconstructing the social order nor his vision of the shape of that new order within the shell of the old – neither of these was his real passion, the substance of his vocation. Peter’s love was doctrine. He was a born teacher. He loved conversation, although it doesn’t seem that you could say he loved debate per se. He didn’t pretend such sophistication. His goal in discussion was conversion. He wanted his interlocutor to see things his way. The thrill of the melding of two minds and the shining of the light of what he was convinced to be true on a darkened intellect – that was his muse.

He articulated in several places an antipathy for “technicians.” The average worker, skilled or unskilled, was a technician, a functionary. And scholars, too, were cogs in a wheel of academia. In the Houses of Hospitality, Peter wanted to foster an atmosphere where “Catholic scholars are dynamic and not academic and Catholic workers are scholars and not politicians.” He wanted a place where the ideas he embraced and propounded would find right soil, sink in, take root, grow and blossom. And the means of sowing this crop were his Easy Essays.

The essays are not quite prose. Nor could they properly be called poetry. They’re thought-capsules in a rudimentary form. They are a delivery system. There’s some pith and some ornamentation, but it never distracts. The goal in Maurin’s writing is clear: indoctrination. The point is hammered home, concisely and without conceit. There’s nothing to distract from the main goal. There’s none of the atmosphere of Dorothy’s writing, in which you can smell the dank apartment or the wet soil. Peter’s words are like pills to be swallowed in a gulp rather than savored. But they have in common with pills something other than the bland delivery mechanism: they give good medicine to the mind and soul.

It might seem a strange first choice for the Distributist Bookshelf to pick Peter Maurin’s aphoristic “essays.” But there is a wealth of good information contained in these brief locutions. In the background can be easily discerned the influence of Chesterton and Belloc, Gill and Pepler, Maritain and Mounier. But unfamiliarity with this background is no impedance to appreciating Maurin’s writings. His thoughts are crystal clear. No need to refer to footnotes or an encyclopedia.

Not all of Maurin’s advice will be practical for modern Distributists. People may take some exception to his “true communist” sympathies or his agrarian ideals. But Maurin is a great way to get in touch with the soul of Distributist philosophy. Aquinas and the Papal Social Teachings run like bright threads throughout the tapestry of his writing. These, like other themes, are generously repeated (or better, recapitulated), so that a few reads of his essays gives one a very good familiarity with the “spirit” of Distributistism. He holds personalism in tension with communitarianism, revolution in tension with tradition, idealism in tension with realism.

My favorite of Maurin's essay, and a good sample of his writing, is the one entitled “When Christ is King.”

In the essay, Maurin identifies himself as a "radical" and then distinguishes this from both "liberals" and "conservatives":

Maurin wants radical change, and notes the difference that this implies with other ideologies. Conservatives want no change. Liberals' New Deal is merely a "patching up." Socialists and Communists want a change that can't really be.

A society of go-givers. Where have we heard that before? Sounds like certain amounts of gratuitousness would be involved in such a society, at least it sounds that way to me.

The Easy Essays of Peter Maurin are too-little appreciated today. As we try to find a way to make the wisdom of the great lights of Personalist and Distributist thought accessible to all of society, the summations of Peter Maurin can be a great aid. Many workers were made scholars sitting at that man's feet. And much more important, they were probably made saints almost as often.

The way to reconstructing the social order isn't through welfare programs or stimulus packages, nor through liberated market mechanisms paying heed to no extrinsic value or meaning. The social order will change when men are changed: when they are made saints who love the good, and scholars who love the true.

Pick up a copy of Maurin's Easy Essays and put it on your Distributist shelf today. His ideas just might change you. And through you, they may - even in a little way - change the world.
Posted by Joe Grabowski at 1:57:00 PM